There has been a flurry of activity around standardization of drone operations to support innovation, performance and safety. In this article we will focus on the specific topic of Remote-ID for drones.

If you already know about Remote-ID, and just want to install a Display Provider and Application just jump to installation instructions.

ASTM’s committee on Unmanned Aircraft Systems F38 has worked on a wide range of un-manned aviation systems (UAS) standardization and has recently released a standard for Remote ID.

Broadcast RID is emitted directly from the drone via public WiFi Channels, Bluetooth 4.0 and 5.0 and received via widely available equipment including antennas common within most smartphones. Network RID is shared via a TCP/IP network, normally through the operator’s software. Since there may be many proximate operators, the orchestration of this network RID is accomplished via a software called Discovery and Synchronization (DSS). The DSS enables communication between operators, authorities and stakeholders. There are provisions for exchanging dynamic restrictions and supplemental data (e.g., weather) etc. within the DSS. Broadcast and Network RIDs have pros and cons but Network RID considered a robust scalable way to identify drones.

How do you identify drones?

This article we will focuses on the Network RID and how the RID standard addresses displaying Network RID from a end-user point of view. See the image below depicting how a “Network Remote ID flow” works. 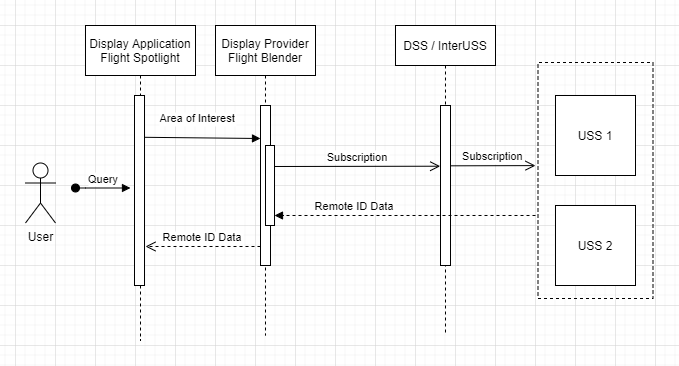 See it in action

We already offer a flight feed aggregator called Flight Blender, see the article introducing it. We have recently introduced a “Network Remote-ID module” inside Flight Blender for communication with the DSS and the service providers. These include querying and downloading the data to show it on a “Display Applications” e.g. Flight Spotlight. Consider the system image below.

The current Remote-ID module is compatible with the ASTM standard for network RID and will be updated as the standard progresses. Consequently you need not understand the standard to enable Remote-ID operations, it is simply done for you. Of course as other network based Remote-ID standards appear, we will build support for them as well within Flight Blender as additional modules.

If you have the capability, you can install using the straight forward installation instructions using Docker. You have the choice to host it on your own infrastructure or we can host a instance for you to enable network RID capability. We can help with installation and customization as necessary, taking into account the security and other specific requirements your organization may have.